Are you considering using a VPN client? Perhaps you are not 100% sure if a VPN is the right solution for you. Or maybe you are interested in the advantages and disadvantages of using a CPN? Then you are in exactly the right place.

In this article, we will show you the advantages and disadvantages of VPNs and help you decide whether you should use a VPN client.

In sum: How does a VPN work?

Before we address the advantages and disadvantages of VPNs, we would like to give a short summary of what a VPN is and how they work. If you are also interested in the technical details, we recommend our detailed article on how VPNs function.

Our Shellfire VPN-client is available for the following operating systems:

It is also possible to connect our Shellfire Box to the Internet via a secure VPN connection with devices that are not technically compatible, such as Google Chromecast, Amazon Fire TV Stick or Apple TV. The following video demonstrates exactly how this works:

Does this product interest you? Then we invite you to seek more information about the Shellfire Box here!

What are the main advantages of using a VPN?

VPN allows you to browse and download anonymously, because your real IP address is never made public—only the IP address of the VPN server you are connecting to is visible.

To truly maintain anonymity, it is important that you choose a VPN provider that does not collect log files. Otherwise, it would theoretically be possible for that VPN provider to pass on your data if, for example, a government agency requests it.

A VPN helps you to effectively bypass such geo-blocks by simply connecting to a server in another country. This makes it possible for you to simulate, for example, an American IP address (or an IP address from any other country) while you are traveling.

A VPN allows you to bypass geo-blocking and access websites and content that are actually blocked in your region. (Source: tanaonte/123rf)

A VPN service also helps to bypass firewalls, either at a local or federal level.

A local firewall would be, for example, a firewall in a university that prohibits you from connecting to Netflix, or a firewall at work that blocks websites such as YouTube. Connecting to the Internet via a VPN makes such blocks a thing of the past.

At the federal level, for example, one could mention the “Great Firewall of China”, which can be circumvented with a China-VPN. There are also other countries whose governments try to enforce restrictions online, where a VPN can be helpful. These countries include Dubai, Iran, Turkey, and Russia.

Establish a secure connection to the Internet

Public WLAN networks are more dangerous than you think. Whether you’re at the airport, in a hotel or in the coffee shop next door, even the least talented hacker can easily spy on sensitive user data over public Wi-Fi networks.

When you connect to the Internet via VPN, your data is encrypted and hackers have no chance of obtaining sensitive information such as credit card details. 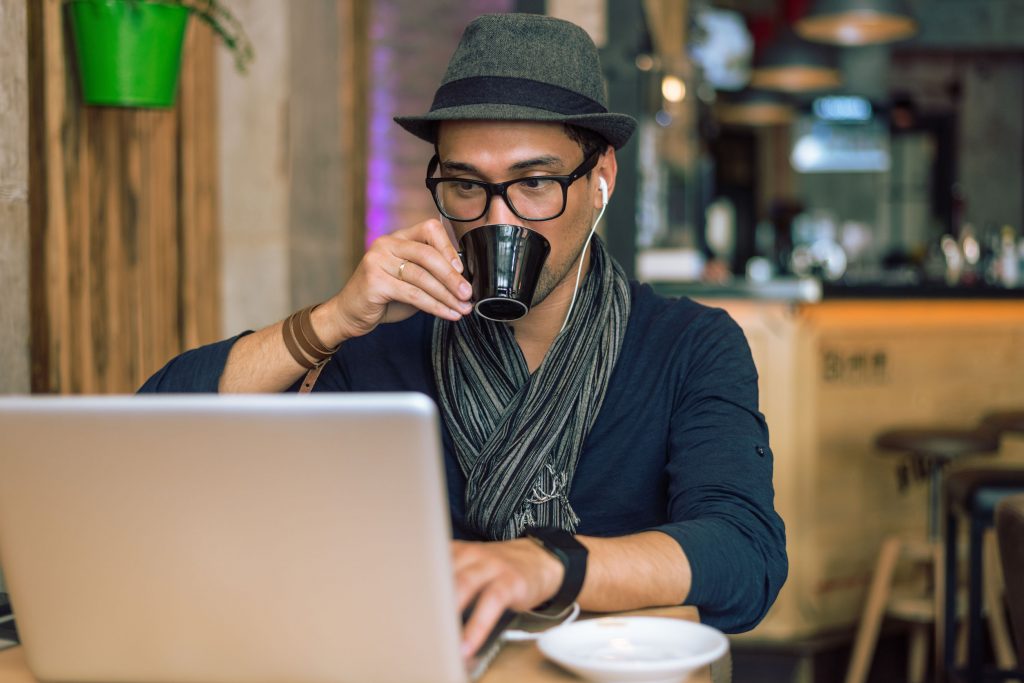 You like to work out of a café or connect to public WLAN networks? Without a VPN-client, you’re taking a big risk! (Foto: Bernard Bodo/123rf)

Net neutrality has already been abolished in the USA and other countries may follow suit. The result could be that you may suffer from reduced download speed when streaming certain content.

If you connect to the Internet via a VPN tunnel, your ISP will not be able to see exactly what you are doing on the Internet, making it difficult to throttle it effectively.

What disadvantages can arise from using a VPN?

Internet speed may be slower

In some cases, a VPN can reduce your browsing speed, which is usually the case for free VPNs (such as the free version of Shellfire.)

In the case of Shellfire, the speed remains absolutely sufficient to surf the Internet anonymously. When downloading or streaming, however, it is definitely recommended to use a premium VPN without speed limits, such as our Shellfire Premium VPNs, which is available for around 5 € per month and gives you access to servers and IP addresses in 35+ countries.

By default, not all devices support VPN

An Apple TV, Chromecast, Amazon Fire TV Stick, and many Smart-TVs at a factory setting do not support VPN. Therefore, most VPNs are completely useless for such devices.

That’s why we’ve launched the Shellfire Box which allows you to connect to the Internet via VPN quickly and easily, when with devices that lack default VPN support.

All in all, VPNs clearly have more advantages than disadvantages—and cater to every type of user. What’s more, even high-quality, premium VPNs are already available for around 5 € per month. If you like to download, stream or deal with sensitive data from time to time, and you connect public WLAN networks, a VPN is practically indispensable for you.