An anonymous and secure network free of barriers sounds like wishful thinking nowadays. The unmasking of Edward Snowden, frequent massive data breaches and privacy scandals have left plenty of internet users unsettled. Privacy represents a basic human right in modern democracies, so events like these illustrate an alarming trend. Additionally, in our opinion an unrestricted, secure internet access is an essential basic right.

There are ways to get back your freedom and privacy while making your internet connection more secure though. One of the possibilities is our Shellfire Box – a powerful, easy to use use VPN router. How it works, what advantages using it has and how to set it up: That’s what you’ll learn in our all-in-one guide.

What is a VPN router?

A VPN router is a networking device that lets you easily connect you and your online-devices to a virtual private network (VPN). It lets you surf and download securely and anonymously with all of your devices – whether on a smartphone, a PC or a laptop, a gaming console or a Smart TV. Additionally, you can circumvent internet censorship and bypass country restrictions (geoblocking).

Shellfire Box lets anyone set up a secure, encrypted LAN or WLAN network at home and connect it to the VPN. The handy box is fully-configured hardware. No additional software, which would first have to be installed and might not work with your device, is required.

Find out more about Shellfire Box and how it works here. 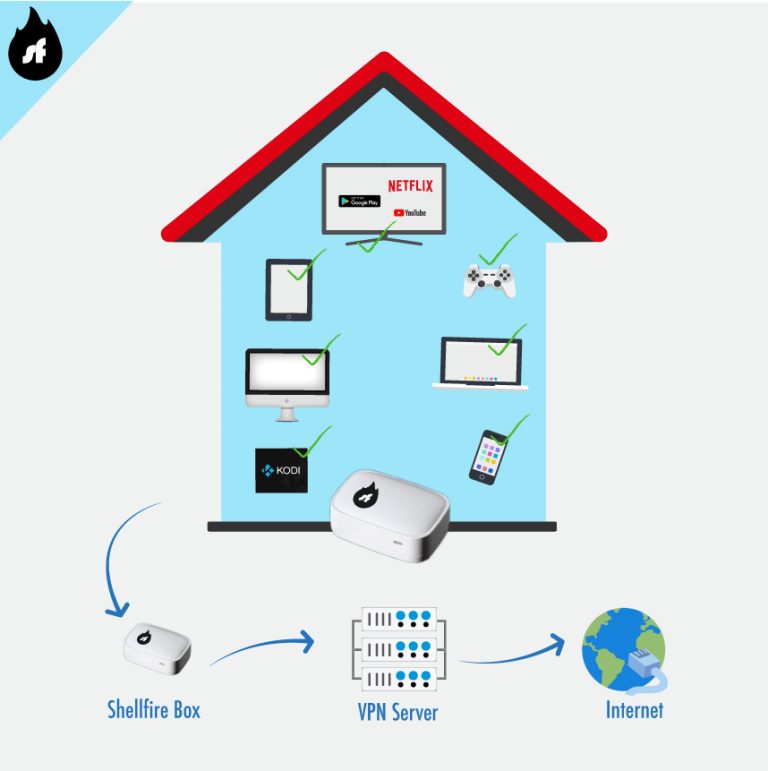 When should a VPN router be used?

There are some very good reasons for using a VPN Router.

The most important: A VPN router allows you to not only use selected, but rather all internet-capable devices to benefit from the advantages that a VPN has to offer.

Here’s why that’s a benefit: Unlike a regular internet connection, a VPN connection transmits data securely by encrypting it. In addition, your privacy is ensured thanks to the use of an anonymous IP address.

You should use the Shellfire Box VPN router:

Firstly, it instantly gives you access to a VPN service and its benefits.

In the case of Shellfire:

The second significant benefit: A VPN router like Shellfire Box doesn’t limit you to certain devices. It gives you the freedom to use any operating system or app while also not having to install any particular software.

The hardware, more specifically Shellfire Box, establishes a VPN connection within seconds. You are then able to connect all internet capable devices to your VPN using a network cable or Wi-Fi.

One of the shortcomings of many VPN Routers is their complicated setup process and the inconvenient adjustments that need to be made. Even professionals can find the configuration tedious. This is one of the weaknesses Shellfire Box alleviates. Installation is as simple as plug & play: Plug in the Box, connect it to the current router and you’re good to go.

Another frequent disadvantage of VPN services and VPN routers is the slow data transmission speed. Data is heavily encrypted for VPN transmission. This increases security and keeps third parties out, but is also a task that requires a lot of computing power and time. In addition, the data has to be sent to at least one VPN server.

Bypassing geoblocking usually requires servers that are located far away from the user’s location. This increases the transmission time.

This can become especially problematic when streaming HD content or downloading large files. If multiple devices access the network simultaneously this can further increase the transmission times. Shellfire Box can largely avoid these problems. It uses a powerful processor and plenty of storage space, as well as using the “PremiumPlus”-VPN service: This means there’s no data or speed limitations and your choice of servers in 35 different countries.

What types of VPN routers are there?

Aside from the type of transmission and encryption methods they use, VPN routers generally differ in their build and operating principle:

Shellfire VPN is one of the routers that come preconfigured with a VPN client. The device configures the VPN connection itself by downloading the required data from a Shellfire VPN server once the first connection to the internet is established.

That’s all it takes to fully establish a secure and anonymous connection. Now all you need to do is connect your devices using Wi-Fi or a networking cable to be able to start surfing using the Shellfire VPN: straightforward, uncensored, anonymous, secure.

Shellfire Box is the perfect plug & play solution for everyone who doesn’t want to have to deal with the complicated configuration of a VPN router.

Using the following link, you can buy Shellfire Box and find more information on our product.

Other routers that offer VPN support

This category includes all routers that include VPN client functionality, as well as routers where this functionality can be added by using an open-source operating system extension (e.g. DD-WRT or Tomato).

Having a VPN client feature means that the VPN connection can be established by the router itself using standards like IPSec, OpenVPN or PPTP. Only very few routers offer this functionality, examples include some devices made by Cisco, ASUS, Netgear and Linksys. The steps that have to be taken in the operating system are complicated, which makes them tasks only network professionals should do.

The benefit of this type of system is that the existing router can be upgraded to a VPN router.

You can use services like Shellfire VPN that establish an encrypted connection between your device and the VPN server with these types of routers, however, you will not be able to take advantage of the benefits that VPN routers like Shellfire Box offer.

Download speeds of VPN routers are very important and a key deciding factor. Their speed depends on the computing power of the processor, as well as the storage capacity of their memory. Shellfire Box uses a 580 MHz CPU and fast DDR-RAM with a capacity of 64 MB.

The second factor required for fast data transmission speeds is connectivity. Shellfire Box has a 100 Mbit/s-LAN connection and uses the 802.11b/g/n standard with a 300 Mbps bandwidth for its WiFi connection.

Thanks to these features, Shellfire’s VPN router reaches speeds up to 15 Mbit/s, provided that you have a good connection. Even video streaming in 1080p is no problem. Other VPN routers commonly only reach speeds in single-digit Mbps ranges.

Download speeds are a key deciding factor for VPN routers.

We built a global server network in 35 countries for just this reason. The only thing left for you to do is picking a server in the country of your choice and enjoying the full range of content: US Netflix from your home, live streams from your home country when you’re on holidays.

Shellfire Box vs. other VPN routers

Shellfire Box has some key differences to other VPN routers.

We’ve already mentioned how easy the installation process is: Shellfire Box is preconfigured with the VPN client. The only thing left to do is connecting it to your existing router and you’re good to go. Plug & play just like it was always intended.

The benefits are more than just that though:

These characteristics don’t limit the VPN routers performance. This is partly due to its use of Shellfire’s “PremiumPlus” VPN, which offers 256-bit encryption (PPTP, L2TP/Ipsec or OpenVPN), unlimited speed and traffic and servers on 6 continents and 35 different countries.

How do you set up a VPN router?

Setting up a VPN connection or configuring a VPN router makes even the most experienced IT guys wary. This isn’t a result of a lack of knowledge, but rather the sheer amount of options, standards, protocols and providers.

Why make something complicated when there’s a easy way though?

Easy enough, so far. Other VPN Routers usually require deep insights into their operating system or even the installation of additional software. Only very few models offer user-friendly interfaces for configuration. The problem often lies in the vast number of different configurations that these interfaces offer.

If you’re not deeply familiar with VPNs the results of these configurations can become almost impossible to predict. The benefits of VPN Routers quickly turn into disadvantages: You end up surfing more dangerously instead of more securely. That can’t happen with Shellfire Box.